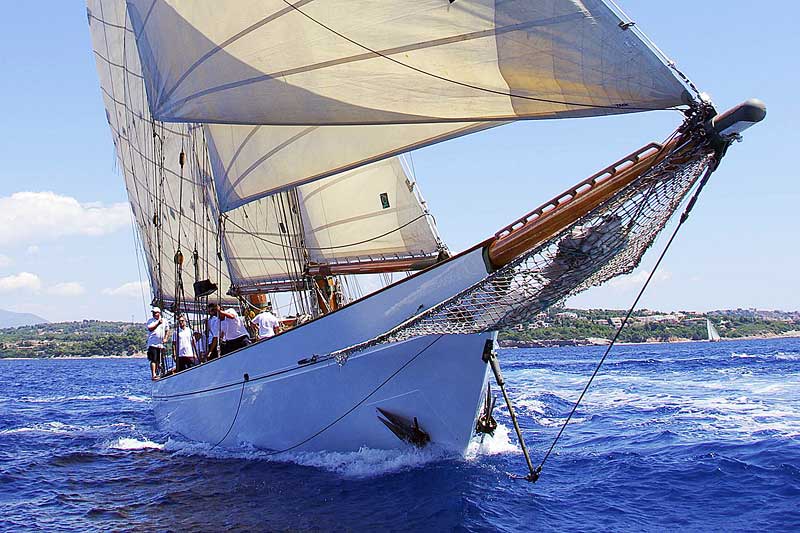 Aello was designed in 1919 and launched in Hamburg in 1921 by Max Oertz, probably the most famous German shipbuilder of his time. Oertz built the famous imperial schooners Germania and Meteor IV for German Kaiser Wilhelm II. Meteor IV competed against King George’s V legendary Britannia and was used as a political tool by the Kaiser. Indeed the Kaiser played an important part in the creation of prestigious yacht clubs and the launching of international regattas.

Aello was created as Meteor’s IV sister vessel and is the only remaining large schooner of Max Oertz design in the world. Aello was build for the account of Greek merchant and art lover Antonios Benakis a descendent of an illustrious Greek family of Alexandria, Egypt. Antonios Benakis left behind him a legacy of Museums, art collections and in 1934 founded and became the first president of the Yacht Club of Greece.

Aello was the first yacht member of the Club and to this day one can see engraved on her beautiful bronze wheel the initials of the Yacht Club. When Antonios Benakis decided to move permanently to Greece he made his historic return voyage from Alexandria onboard Aello. After many years of sailing on the Mediterranean Sea, Aello was eventually acquired by a Baron and Admiral of the British Empire who began a lengthy voyage around the world that spanned over many years.

Aello was sold after the World War II and was subsequently abandoned in a mud-berth in England. Although she lay there for nearly four decades, the mud where she rested on had the fortunate characteristic of preserving its hull.

To enquire about more information for Aello, please use the small form on the right —>